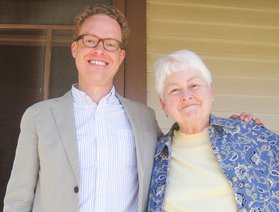 Andy Jewell & Janis Stout     Andrew Jewell, editor and designer of the Willa Cather Archive (cather.unl.edu) and Co-Editor of the forthcoming Complete Letters of Willa Cather, is a Professor in the University of Nebraska–Lincoln Libraries. Andy received his Ph.D. in English in 2004 and has published several pieces on American writers, scholarly editing, and digital humanities. He is co-editor, with Amy Earhart, of the book The American Literature Scholar in the Digital Age. He is the co-editor, with Janis Stout, of The Selected Letters of Willa Cather (Knopf, 2013), and the co-editor, with Amanda Gailey, of the journal Scholarly Editing: The Annual of the Association for Documentary Editing (www. scholarlyediting.org). He joined the Board of Governors of the Willa Cather Foundation in 2008.