Pat Aylward and Christine Lesiak collaborated on Willa Cather-The Road is All, which premiered on American Masters in 2005. That 90-minute program begins with a scene of Cather’s letters being burned in a fireplace. At the time, many scholars believed most of those letters were gone.  Now with Yours, Willa Cather, an unexpected view of Cather emerges. 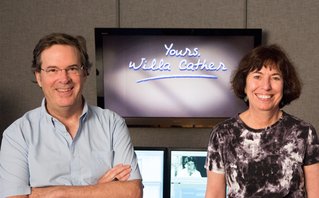 In this 30-minute documentary we hear a voice very different from the polished and controlled voice of Willa Cather the novelist.  Instead we meet a person who is vulnerable, funny and at times, ruthless. By bringing Cather’s letters to life, Lesiak and Aylward create an intimate portrait of one of the greatest writers of the 20th century.

Christine Lesiak has written, produced and directed PBS documentaries which have appeared on both American Experience and American Masters.  With a focus on history and the humanities, her programs have won numerous awards, including the Peabody Award, the Writer’s Guild Award and Gabriel Awards. Standing Bear’s Footsteps premiered on PBS prime time in 2012. Yours, Willa Cather—the documentary, eBook, website and interactive Book Club—is designed as a multi-faceted learning experience. Lesiak is currently producing and writing Medicine Woman, a documentary about how Native American women are inspiring new concepts of healing.

Pat Aylward has been shooting and editing award winning documentary films for the past 25 years. His most recent projects, Can’t Stop Gambling, Emery Blagdon and His Healing Machine, and Standing Bear’s Footsteps, have all been broadcast on PBS. He is once again collaborating with Christine Lesiak as videographer and editor on Medicine Woman.