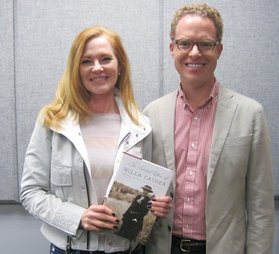 Andy Jewell and Marg Helgenberger  As the voice of Willa Cather, Marg Helgenberger has all the right credentials.  She’s an Emmy Award-winner and Golden Globe nominee, recently seen as a Special Guest Star in a recurring role on the CBS series Under the Dome.  And her roots are in Nebraska.

Marg Helgenberger was born in Fremont and grew up in North Bend, Nebraska—where the town named a street for her.  She attended the University of Nebraska at Kearney and received her degree in speech and drama from Northwestern University. After graduating college she was cast on the ABC-TV daytime drama Ryan’s Hope. 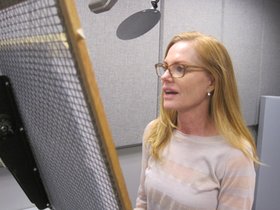 Marg reading the letters at an NET studio     Helgenberger starred on CSI: Crime Scene Investigation from the beginning of the series on CBS in 2000.  Her role as Catherine Willows, a Las Vegas crime scene investigator, earned two Emmy nominations. But she moved on after 12 years because, as she said, “I felt the need to reassess and regroup and I’m—scary as that is—I’m also very excited about the great wide open, the future and all the possibilities.”

In 2014 she starred in the Barrington Stage Company’s production of The Other Place.  Her breakout role as K.C. on China Beach, won her an Emmy Award in 1990.

Marg currently resides in Los Angeles.  She is an avid supporter of various breast cancer and MS charities and is an ambassador for Stand Up to Cancer.