Listen to the 1892 Letter to Louise Pound

I am just about half through a nasty job of packing, and the idea has suddenly occured to me that after going up to your place tonight to see your new “Worth Costume,” I did not give voice to my admiration. I dont know just why I did not, but it rather overcame me, the general effect struck me so hard that I lost track of the incidentals. I find that I have four very distinct 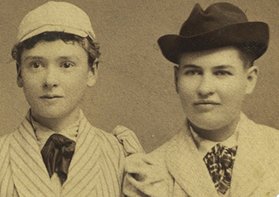 Louise Pound & Willa Cather impressions left with me; the neck, the train, the color, and what the whole affair set off. I suppose you would object to my saying that you looked very handsome last night; well it is true at any rate, and the man in the dress coat had the greenest envy that I was able to generate,—I am not sure that it is the first time he has had it.

Just a word about that Persian poem with a name which I have forgotten how to spell [The Rubáiyát of Omar Khayyám by Edward FitzGerald]. I wanted to get some thing that I liked awfully myself, something that I liked in its self, then it would not seem so formal, and so like carting merchandise up to your house. I thought of sets and sets, Ruskin etc. but, well, sets are sets. Then I thought of that Rubyat, I have liked it thing ever since I was a kid, and they are not so beastly common as every thing else, and I got awfully smitten with the illustrations [by Elihu Vedder], they are so queer, unlike any one else, and that swirl he brings in so often is a great idea if you take the note’s explanation of it. I dont know of any thing that has the horror and mystery of the whole thing so strongly as those whirling curves. I got that instead of any other or others because I just loved the book through and through as much as it is possible to love another persons work, and because of that I felt more of a right to inflict it upon you, see? 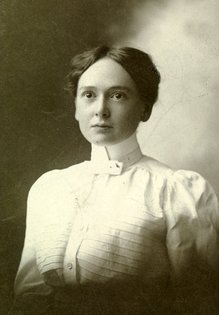 Louise Pound as a young woman       I was rather a bore tonight, or rather last night now, wasn’t I? Well, I could not help thinking that it was the last time I should see you for some time, and it affected me rather strangely. If I had known how queer it would make me feel I would not have gone up to your house. I suppose you did not feel just as I did because I was only one out of a great many who was going away while Miss [Minnie] DePue and the Deputy Governor and all the rest will be on deck so that one gone wont make much difference with you. I did feel queer, I did’nt know it had gotten such a hold on me, I shook myself after I got away, but it did’nt alter the facts of the case any. I wanted very much to ask you to go through the customary goodbye formality, but I thought it might disgust you a little so I did’nt. It was so queer that I should want to, when three years ago I had never seen you, and I suppose in three years more—but I dont like to think of that, three years have’nt any right to make any difference and of course they will, and I suppose we will laugh at it all some day as other women do, it make[s] me feel horribly to think of that, it will be worse than if we should hate each other. It is manifestly unfair that “feminine friendships” should be unnatural, I agree with Miss De Pue that far.

I did’nt congratulate you today because I did not know what to say, I care more for what you will do than for what you have done. I want for you in every channel just about the best that life has to give, thats all.

This epistle is infinitly sillier than one I tore up last March and did not send you, but I am tired and just have’nt physical energy enough to tear it, so you will have to pardon my “frame of mind,” and lay it all to the weather.

I suppose you will get this in bed, for goodness sake dont let Tude [Olivia Pound] look over your shoulder.
Save that Union photo, please

Learn more about the relationship between Willa Cather and Louise Pound.