Listen to the 1908 Letter to Sarah Orne Jewett

Such a kind and earnest and friendly letter as you sent me! I have read it over many times. I have been in deep perplexity these last few years, and troubles that 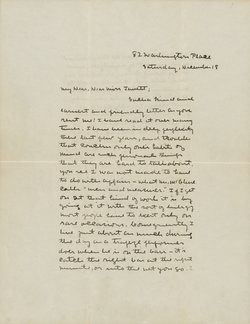 The hand written letter from Willa Cather to Sarah Orne Jewett concern only one’s habits of mind are such personal things that they are hard to talk about. You see I was not made to have to do with affairs—what Mr. McClure calls “men and measures.” If I get on at that kind of work it is by going at it with the sort of energy most people have to exert only on rare occasions. Consequently I live just about as much during the day as a trapeze performer does when he is on the bars—it’s catch the right bar at the right minute, or into the net you go. I feel all the time so dispossessed and bereft of myself. My mind is off doing trapeze work all day long and only comes back to me when it is dog tired and wants to creep into my body and sleep. I really do stand and look at it sometimes and threaten not to take it in at all—I get to hating it so for not being any more good to me. Then reading so much poorly written matter as I have to read has a kind of deadening effect on me somehow. I know that many great and wise people have been able to do that, but I am neither large enough nor wise enough to do it without getting a kind of dread of everything that is made out of words. I feel diluted and weakened by it all the time—relaxed, as if I had lived in a tepid bath until I shrink from either heat or cold.

I have often thought of trying to get three or four months of freedom a year, but you see when the planning of articles is pretty much in one person’s head it is difficult to hand these many little details over to another person. Your mind becomes a card-catalogue of notes that are meaningless except as related to their proper subject. What Mr. McClure wants is to make me into as good an imitation of Miss Tarbell as he can. He wants me to write articles on popular science, so called, (and other things) for half of each week, and attend to the office work in the other half. That combination would be quite possible—and, I fear perfectly deadening. He wants, above all things, good, clear-cut journalism. The which I do not despise, but I get nothing to breathe out of it and no satisfaction. 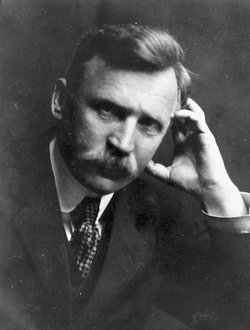 Mr. McClure     Mr. McClure tells me that he does not think I will ever be able to do much at writing stories, that I am a good executive and I had better let it go at that. I sometimes, indeed I very often think that he is right. If I have been going forward at all in the last five years, [i]t has been progress of the head and not of the hand. At thirty-four [actually, she had just turned thirty-five] one ought to have some sureness in their pen point and some facility in turning out a story. In other matters—things about the office—I can usually do what I set out to do and I can learn by experience, but when it comes to writing I’m a new-born baby every time—always come into it naked and shivery and without any bones. I never learn anything about it at all. I sometimes wonder whether one can possibly be meant to do the thing at which they are more blind and inept and blundering than at anything else in the world.

But the question of work aside, one has a right to live and reflect and feel a little. When I was teaching I did. I learned more or less all the time. But now I have the feeling of standing still except for a certain kind of facility in getting the sort of material Mr. McClure wants. It’s stiff mental exercise, but it is about as much food to live by as elaborate mental arithmetic would be.—Of course there are interesting people and interesting things in the day’s work, but it’s all like going round the world in a railway train and never getting off to see anything closer. I have not a reportorial mind—I can’t get things in fleeting glimpses and I can’t get any pleasure out of them. And the excitement of it doesn’t stimulate me, it only wears me out.

Now the kind of life that makes one feel empty and shallow and superficial, that makes one dread to read and dread to think, can’t be good for one, can it? It can’t be the kind of life one was meant to live. I do think that kind of excitement does to my brain exactly what I have seen alcohol do to men’s. It seems to spread one’s very brain cells apart so that they don’t touch. Everything leaks out as the power does in a broken circuit. 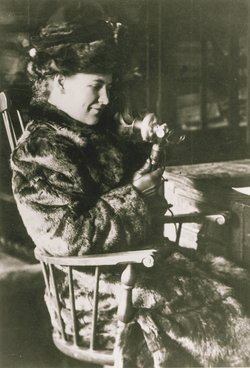 So whether or not the chief is right about my never doing much writing, I think one’s immortal soul is to be considered a little. He thrives on this perpetual debauch, but five years more of itwill make me a fat, sour, ill-tempered lady—and fussy, worst of all! And assertive; all people who do feats on the flying trapeze and never think are as cocky as terriers after rats, you know.

I have to lend a hand at home now and then, and a good salary is a good thing. Still, if I stopped working next summer I would have money enough to live very simply for three or four years. That would give me time to pull myself together. I doubt whether I would ever write very much—though that is hard to tell about for sure; since I was fifteen I have not had a patch of leisure six months long. When I was on a newspaper I had one month vacation a year, and  when I was teaching I had two. Still, I don’t think that my pen would ever travel very fast, even along smooth roads. But I would write a little—“and save the soul besides [from Robert Browning’s The Ring and the Book].” It’s so foolish to live (which is always trouble enough) and not to save your soul. It’s so foolish to lose your real pleasures for the supposed pleasures of the chase—or of the stock exchange. You remember poor [Oliver] Goldsmith [from “The Deserted Village”]

“And as an hare whom horns and hounds pursue,
Pants for the place from which at first she flew”

It is really like that. I do feel like such an rabbit most of the time. I dont mean that I get panic-stricken. I believe I am still called “executive” at the office. But inside I feel like that. Isn’t there a new disease, beloved by psychologists, called “split personality”?

Of all these things and many others I long to talk to you. In lieu of so doing I have been reading again this evening [Jewett’s story] “Martha’s Lady. ” I do think it is almost the saddest and loveliest of stories. It humbles and desolates me every time I read it—and somehow makes me willing to begin all over and try to be good; like a whipping used to do when I was little. Perhaps after Christmas I can slip up to Boston for a day. Until then a world of love to you and all the well wishes of this season, an hundred fold warmer and more heartfelt than they are wont to be. I shall think of you and of Mrs. Fields often on Christmas Day.

[written in the top margin of the last page:] As I pick up the sheets of this letter I am horrified—but I claim indulgence because I have left wide margins.

Sarah Orne Jewett had a huge impact on Willa Cather evolving from an editor to a writer.