It will be classed as a “war story”

Listen to the 1922 Letter to Dorothy Canfield Fisher 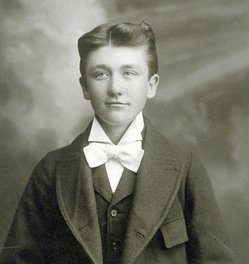 Grosvenor P. Cather, as a child  Yes, it will be classed as a “war story”, which means it will sell about twelve thousand. And God knows I never wanted to write a war story. I lost six months, refraining from putting pento paper on this one. But it stood between me and anything else.

It was like this: My cousin, Grosvenor, was born on the farm next my father’s. I helped to take care of him when he was little. We were very much alike–––and very different. He never could escape from the misery of being himself except in action, and whatever he put his hand to turned out either ugly or ridiculous. There were years when we avoided each other. He had a contempt for my way of escape, and his own ways led to absurdities. I was staying on his father’s farm when the war broke out. We spent the first week hauling wheat to town. On those long rides on the wheat, we talked for the first time in years; and I saw some of the things that were really in the back of his mind. I went away and forgot. I no more thought of writing a story about him than of writing about my own nose; it was all too painfully familiar. It was just to escape from him and his kind that I wrote at all. 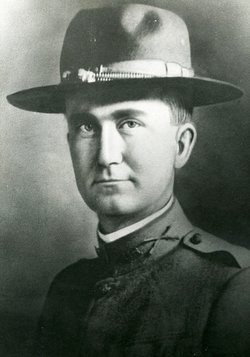 G. P. Cather as a soldier     He went over in July, 1917. He was killed at Cantigny, May 27, of the next year. That anything so glorious could have happened to anyone so disinherited of hope! Timidly, angrily, he used to ask me about the geography of France on the wheat wagon. Well, he learned it, you see. I send you his citation. I first came on it in the morning paper when I was having my hair shampooed in a hairdresser’s shop. From that on he was in my mind. The too-personalness, the embarrassment of kinship, was gone. But he was in my mind so much that I couldn’t get through him to other things. It wasn’t affection, but realization so acute that I could not get away from it. I never meant to write a story with a man for the central figure, but with this boy I was all mixed up by accident of birth. Some of me was buried with him in France, and some of him was left alive in me. 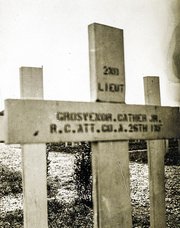 G. P. Cather’s grave in France    It’s a misfortune for me and my publisher that anything so cruelly personal, so subjective, as this story, should be mixed up with journalism and public events with which the world is weary and of which I know so little. But that’s the way things come about in this mixed‑up world. You’ll admit I’ve not been very sentimental, I’ve held the rein tight on him. I’ve cut out all the pictures—I believe it’s ‘pictures’ that I am suppose to do best,—because he wasn’t much the picture-seeing kind. I’ve allowed myself very few accessories to work with. If the readerdoesn’t get him, he gets nothing––––not one pretty phrase, not one ‘description’ the old ladies on hotel piazzas can comment upon.

I tried to keep the French part vague, seen from a distance, and only what he sees.

Well, he’s given me three lovely, tormented years. He has been in my blood so long that it seems to me I’ll never be quite myself again.

I am sending you the rest of the story by this mail. I will write you and tell you where to mail(#) it to me. I’m too shaky and worn to go a-visiting, my dear. I want to go to see you when I am a little bit, if not all, there. I will probably leave for Wernersville, Delaware Water Gap, on Monday

#The last part. The part that you now have you will send back to me here, as you say in your letter. The proofs should have reached you last Monday, with my letter.

In February 1922, as Cather was finishing her new novel One of Ours, she asked fellow writer and old friend Dorothy Canfield Fisher to read page proofs and tell her “if you noti...