The effect is greater than the cause

Listen to the 1925 Letter to F. Scott Fitzgerald 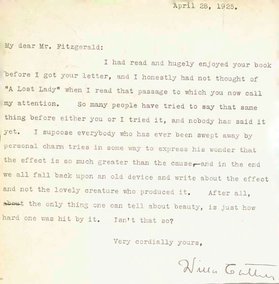 I had read and hugely enjoyed your book before I got your letter, and I honestly had not thought of “A Lost Lady” when I read that passage to which you now call my attention. So many people have tried to say that same thing before either you or I tried it, and nobody has said it yet. I suppose everybody who has ever been swept away by personal charm tries in some way to express his wonder that the effect is so much greater than the cause,—and in the end we all fall back upon an old device and write about the effect and not the lovely creature who produced it. After all, the only thing one can tell about beauty, is just how hard one was hit by it. Isn’t that so?

F. Scott Fitzgerald was 28 years old when he wrote Cather a letter from the island of Capri in Italy. “As one of your greatest admirers,” he began, “I want to write to explain a...