The Story Behind the 1922 Dorothy Canfield Fisher Letter

In February 1922, as Cather was finishing her new novel One of Ours, she asked fellow writer and old friend Dorothy Canfield Fisher to read page proofs and tell her “if you notice 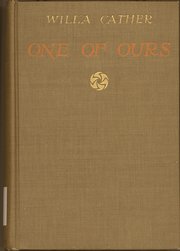 anything that seems to you misleading as to facts, or false as to taste.” Cather had worked hard on the novel for nearly four years, had researched the experience of soldiers in World War I, had traveled to France as part of that research, and had attempted to write a different kind of book than she had written before. The book was a risk, and that made her nervous.

Cather also knew that the way her central character, Claude, experienced World War I would not be appreciated by many critics. The events in the novel are filtered through the perspective of her character, and this character would not deliver the kind of message about the war the critics typically applauded. She tried to encourage good reviews by writing critics in advance and explaining her goal for the book: “I knew the ugliness of his life and the beauty—to him—of his release,” she wrote H. L. Mencken, “He can’t help what went over this country, any more than you or I can.” 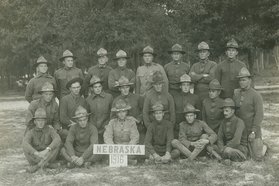 G. P. Cather’s army unit    This letter to Dorothy Canfield Fisher is, in some ways, another letter to a critic explaining the book (and hopefully encouraging a good review). Fisher was, of course, a personal friend as well as an eminent voice in the U. S. literary world; Cather probably cared about her opinion even more because she was both.

The inspiration for the book, she explains, is her cousin Grosvenor Perry (or G. P.) Cather. She didn’t know him very well before he died at Cantigny on May 28, 1918, and she certainly never saw anything very interesting in his character. In fact, most of his life—G. P. Cather was 34 when he died—he was the kind of bumbling person Cather had little tolerance for. He did poorly in school, had trouble supporting himself financially, had an unsuccessful marriage, and seemed generally devoid of talent and responsibility. But after she learned of his death in battle and the citation for the Distinguished Service Cross, and after she read the letters he wrote to his mother while in training camp and in France, she realized something had transformed him. His success as a soldier and officer surprised her and revealed to her that she had a lot to learn about people and what they are capable of, and she knew that his transformation contained a story she had to tell.

She claimed she could not help but write One of Ours—a book she almost always called “Claude” after its main character. The character, an amalgam of her cousin and 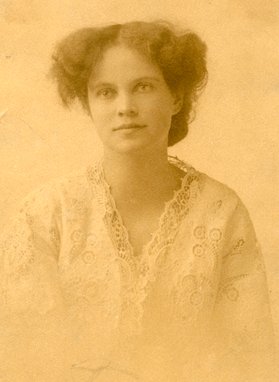 Dorothy Canfield FIsher otherinfluences, haunted her. He seemed to be near her when she was walking in the park, or listening to a symphony. He seemed to demand his story be written, so she wrote it. This “boy” that haunted her was part of her.

Cather had made her literary reputation in books grounded on remarkably strong women:  Alexandra Bergson, Thea Kronborg, Ántonia Shimerda. But with One of Ours she wrote a book with a self-conscious, scared young man at the center. She wrote about vulnerability, her own sense of vulnerability, and that exposure was part of the risk of writing the book. And, in writing to Dorothy Canfield Fisher, she was writing to a person who perhaps underscored that sense of vulnerability. Claude was a character who felt insignificant and foolish next to some of the people he admired, and in a letter that quickly followed this one, Cather confessed to Fisher that she understood the feeling because “that was the way you made me feel when we were in France together that time; and that was the way that I made my poor cousin feel.” (In 1902, when Cather visited Europe for the first, she was ashamed at her lack of sophistication compared to her Sorbonne-educated friend.) 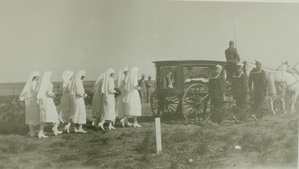 G. P. Cather’s funeral cortege at his reburial ceremonies near Bladen, Nebraska.   She also wished that the war wasn’t a part of the book and even tried to keep mention of the war out of the advertising, as she knew that many would doubt her credibility as a writer of war.She was right, too: several prominent critics criticized the last section of the novel, the part set in France during the war. Mencken thought it largely unbelievable: “The war she depicts has its thrills and even its touches of plausibility, but at bottom it is fought out, not in France, but on a Hollywood movie-lot.”

But many readers liked the book a great deal. Soldiers wrote her telling her she got it just right. The book was a big seller, and it won the Pulitzer Prize for fiction.