The Story Behind the 1925 F. Scott Fitzgerald Letter

F. Scott Fitzgerald was 28 years old when he wrote Cather a letter from the island of Capri in Italy. “As one of your greatest admirers,” he began, “I want to write to explain an instanceof apparent plagiarism which some suspicious person may presently bring to your attention.” He continued with an explanation: while he was working on his new novel The Great Gatsby in 1923, Cather’s novel A Lost Lady was published and he “read it with the greatest delight.” It was only a coincidence, though, that a line from his novel echoed a line from hers. 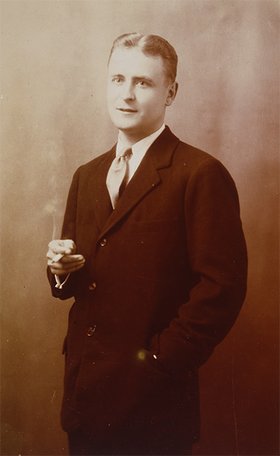 F. Scott Fitzgerald     The line from A Lost Lady he was worried about was from the last section of the novel: “Her eyes, when they laughed for a moment into one’s own, seemed to promise a wild delight that he has not found in life. ‘I know where it is,’ they seemed to say, ‘I could show you!’” He told her he tried to express the same kind of thing in his line from The Great Gatsby about Daisy Buchanan: “there was an excitement in her voice that men who had cared for her found difficult to forget: a singing compulsion, a whispered ‘Listen,’ a promise that she had done gay, exciting things just a while since and that there were gay, exciting things hovering in the next hour.”

Fitzgerald said it was an idea about a woman’s charm he had for “several years,” and that though his line “was neither so clear, nor so beautiful, nor so moving” as Cather’s, “the essential similarity was undoubtedly there.” He considered removing the line when he realized the similarity, but he consulted with several people and decided to leave it in. To prove that it was only a coincidence and not a theft, he included two pages of his first draft of the novel, written before A Lost Lady was published. He circled the relevant sections on the pages to make sure she wouldn’t miss it.

This letter is Cather’s response to Fitzgerald’s. It underscores that, though we now think of F. Scott Fitzgerald as the prototypical writer of the 1920s and The Great Gatsby as the iconic novel of the Jazz Age, that idea didn’t emerge until decades after the book’s publication. When Fitzgerald wrote Cather, he was a new writer with some early successes and an ambition to be great, and she was an established great writer. Her letter projects confidence borne of experience, as his projects respectful anxiety. She knew writers were together reflecting a shared human experience and that sometimes the expressions of that experience were familiar. He wanted to make sure no false accusations damaged his reputation with a writer he greatly admired—or sullied the publication of his new book.