The Story Behind the 1912 Elizabeth Shepley Sergeant Letter

In 1912, Cather made a decision that changed the direction of her career. She had been working at McClure’s Magazine for a half dozen years and had risen to become its managing editor. She took a leave of absence in the fall of 1911 to work on her fiction, and the magazine serialized her first novel in the early months of 1912. The book, titled Alexander’s Bridge, was published by Houghton Mifflin on April 20, 1912.

She had also completed a story called “The Bohemian Girl.” It was different than the other stories she had been publishing. Most of those others were, like Alexander’s Bridge, 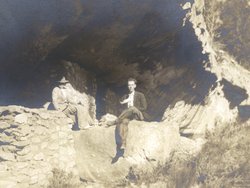 Willa Cather and her brother Douglass in Walnut Canyon, Arizona. psychological fictions in genteel settings. “The Bohemian Girl” was set in Nebraska among the Bohemian immigrant community. She was surprised when McClure’s offered her $750 for the story. She said she told the business manager that such an offer was ridiculous and she would only take $500 for it. “He doesn’t know how much a story is worth to his magazine half so well as I do,” she said, “and I told him so.”

In early April, Cather left Pittsburgh, where she had been staying with the McClung family, and took a train to Winslow, Arizona, to see her brother Douglass. She wrote in detail about her trip west to Elizabeth Sergeant. Sergeant, whom Cather called “Elsie,” was a young writer Cather had met while working at McClure’s. The two women shared an interest in travel and literature as well as a sense of humor; Cather’s dozens of letters to Sergeant are among her funniest and most sarcastic. 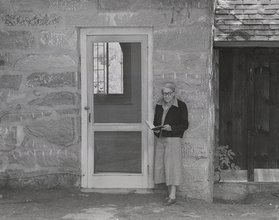 Elizabeth Shepley Sergeant standing in front of her studio     The purpose of Cather’s trip in April 1912 was to visit her family, but also to leave the cities behind. She loved to be out in the open country. Away from the crowds, from the strain of work, from her preoccupation with her relationships and writing, she could turn her mind to other things. “People are the only interesting things there are in the world, but one has to come to the desert to find it out,” she wrote Sergeant during the trip, “and until you are in the desert, you never know how un-interesting you are yourself.”

In this letter, written the same day her first novel was published, Cather says that “‘Bigness’ is the subject of my story.” She probably means “The Bohemian Girl,” or maybe the unfinished story that would soon become O Pioneers!, but she could be talking about the story of her own life. Born in Virginia, she moved to the Nebraska prairie when she was nine years old and was overwhelmed by the expansiveness of the land. It was “not a country at all, but the material out of which countries are made,” she famously wrote. She told an interviewer in 1913 that when she was first introduced to Nebraska she rode a wagon deep into the country and felt “as if we had come to the end of everything.” The open prairie, the West, Bigness: it scared her. She feared she would be lost in it, would, as she says in this letter, “die in a cornfield.”

But Cather didn’t hold on to the fear she expresses here. Instead, she begins to take on Nebraska as one of the major subjects of her fiction and transforms her fear into O Pioneers!, My Ántonia, A Lost Lady, and many other books. Her “temporary” leave of absence from McClure’s Magazine turned into a permanent departure. Beginning in 1912, she was no longer a journalist who wrote fiction on the side. She was a professional novelist.