Willa Cather wrote some of the most unforgettable fiction of the 20th Century.  She also wrote thousands of letters. People thought most had been burned.

Meet the woman who confesses to a friend that she is “paralyzed” by the open spaces of the West.  Who is so bored with her job as editor of McClure’s that she compares it to living in a “tepid bath.” Who believes her boss when he tells her she has no talent as a writer.  Who writes to F. Scott Fitzgerald, “After all, the only thing one can tell about beauty, is just how hard one was hit by it. Isn’t that so?”

In Yours, Willa Cather, we hear a voice different from that of Willa Cather the great novelist.  Instead we meet a person who is vulnerable, funny and at times, ruthless.  A fascinating woman who thoroughly mastered the art of letter writing.

Short Clips from the Documentary

[The West Paralyzes Me]

[Into The Net You Go]

[I Never Wanted to Write a War Story]

[The Eyes Of Genius] 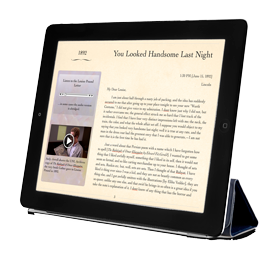 Available for free on iPads, iPhones and Macs on iTunes and iBooks.