The Story Behind the 1921 Dorothy Canfield Fisher Letter

Willa Cather and Dorothy Canfield became friends in 1891, when Cather was a student at the University of Nebraska. Canfield, whose father James H. Canfield was the Chancellor of 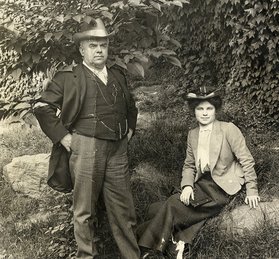 Dorothy Canfield with her father James Canfield, Chancellor of the University of Nebraska the University, was a precocious eighth-grader in Lincoln, six years younger than Cather. The two women started a friendship that would last their lives. Cather’s last known letter, written a week before she died in 1947, was to Dorothy Canfield Fisher.

Dorothy Canfield was herself a highly accomplished writer and literary figure. She wrote over forty books of fiction and nonfiction, many articles and reviews, and served as a Book-of-the-Month Club judge. In her day, she was as well-known a writer as Cather, perhaps even more so.

This literary friendship was highly valued by both women, but it was not always smooth. From 1905-1921, they hardly wrote one another at all. They had a falling out over a story Cather wrote called “The Profile,” in which a central character is a young woman with a disfiguring scar on one side of her face. When Canfield read “The Profile” before it was published, she immediately recognized Cather’s inspiration for the character. 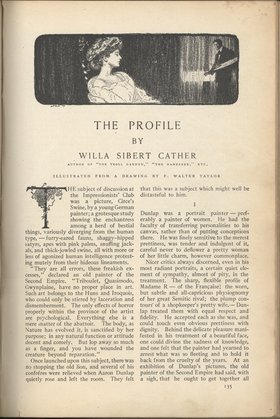 “The Profile” by Willa Cather which caused a break in her friendship with Dorothy Canfield Fisher.    In 1902, when Cather went on her first trip to Europe, she met Canfield in Paris. Accompanying them on their tour of the city was Evelyn Osborne, a woman whom Canfield had befriended while both were working on their dissertations at the Bibliothèque Nationale. Osborne had a large scar on one side of her face, and Canfield knew Cather got the idea for the story from her. As soon as she read the story, Canfield wrote Cather and implored her to remove it from the manuscript of The Troll Garden, the book of stories Cather was about to publish in 1905. “I am quite sure you don't realize how exact and faithful a portrait you have drawn of her,” Canfield wrote, “oh Willa don’t do this thing. . . . I don’t believe she would ever recover from the blow of your description of her affliction.”

Cather did not want to remove her story from the collection and claimed that the character had little in common with Osborne. Canfield thought the ethical breach so serious that she went over Cather’s head to her publisher, S. S. McClure, and got the story removed from the collection. Only two years later, though, McClure’s Magazine published the story in its pages.

This disagreement over “The Profile,” as well as Cather’s apparent choice to follow it with an overt satire of Dorothy’s mother Flavia Canfield in the story “Flavia and Her Artists,” led to a break in the friendship. With the exception of a few letters, Cather and Canfield had no meaningful connection for over fifteen years.

In the spring of 1921, Canfield (who married John Redwood Fisher in 1907) published a review of Cather’s book Youth and the Bright Medusa in the Yale Review, and publicly praised her old friend’s emergence as a fine writer. It began, “There is no writer living in whose excellence Americans feel a warmer, prouder pleasure than we all feel in the success of Willa Cather.” Cather was grateful for the generous review, and immediately wrote Canfield to thank her and to suggest they get together. She hinted that she had matured a great deal since “The Profile,” and that she had some regrets (“what a lot of life one uses up chasing ‘bright Medusas,’” she wrote—that is, attempting to become an artist).

She wrote this letter only a couple of weeks later, after the two friends had seen one another again for the first time in 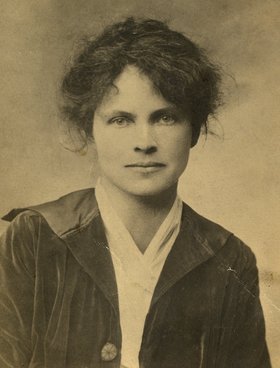 Dorothy Canfield FIsher years. In the letter Cather obliquely references “The Profile” as a “rotten bad” story, and more explicitly mentions two other stories published in her new book: “Paul’s Case” and “The Diamond Mine.” Though she doesn’t mention it, it was probably meaningful to Canfield that though Cather’s new collection of stories did include some older tales originally published in 1905, it did not include either “The Profile” or “Flavia and Her Artists.” Cather had subtly conceded to Canfield’s perspective about those stories and expunged them from the book. Canfield, in her review, acknowledged Cather’s concession: “Miss Cather, conscious, firm-willed artist that she is, has known just where to lay her finger on the false passages and how to lift them out without disturbing the life of the story.” They had forgiven one another and reconnected.