The Story Behind the 1925 President Masaryk Letter

Ántonia Shimerda and her family, featured in Cather’s 1918 novel My Ántonia, were immigrants from Bohemia, which is part of the present-day Czech Republic. In this novel and other 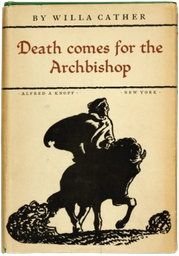 Death Comes for the Archbishop was written in 1925 works, Cather wrote tenderly and knowledgeably about Bohemians. She knew something of their stories from growing up among immigrants in Webster County, Nebraska, and she valued the cultural traditions they brought with them to the United States. My Ántonia is even credited with being the work that introduced the word “kolache”—the name of the much-loved filled Czech pastry—into the English language.

At some point, her work caught the eye of Tomáš Masaryk, a philosopher, sociologist, and political activist who became the first president of Czechoslovakia when it formed as an independent republic in 1918. Masaryk’s political position as president only partially suggests the enormous stature he held among the Czech people. A scholar, writer, and humanitarian who worked for decades on behalf of his homeland, he is credited with being a key founder of the country. Masaryk’s iconic position is reflected in the continued presence of his name and likeness on statues, streets, buildings, awards, and institutions around the world; one of the largest universities in the Czech Republic is Masaryk University in Brno.

Cather never traveled to Czechoslovakia or learned about the country and its leaders firsthand, but she would have known Masaryk’s name and reputation. He was celebrated in the United States (which had a large Bohemian population) as well as Europe. To receive a fan letter from such a man was a remarkable experience. 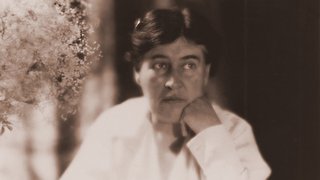 Willa Cather at the time she was writing Death Comes for the Archbishop around 1925     Though there are moments in the letter where one can sense the eminence of the recipient, Cather’s respect for Masaryk is most evident in the way she writes to him with the same honesty and self-assuredness she uses with more familiar correspondents. She does not indulge his request for “biographical material,” but instead explains her preference to put off biographical work until she has “no more to say” herself. She understands that he is touched by her response to the Bohemian families she knew as a child, and so she tells him a little more about the real people who inspired the fiction.

Cather and Masaryk exchanged several letters before his death in 1937. Shortly after this letter was sent, Cather received a packet of Bohemian scenes from Masaryk, and she had them framed and sent to Annie Pavelka, the “living ‘Antonia’” she refers to in this letter. She wrote him in 1935 that “your friendly interest has been and is one of the most cherished rewards of my professional life.”

This connection to Masaryk made the horrors of World War II even more personal to Cather. After she learned of the Nazi invasion of Czechoslovakia in March 1939, she burst out in a letter to an acquaintance, “What is the use? Hitler entered Prague last night. President Masaryk was an old friend of mine. He was a scholar and a lover of letters. In my childhood I had many Czech friends. I love their way of life. . . . However much we may try to live in a nobler past, this thing has come upon us and lowers our vitality and our wish to live.”

Read the Letter to President Masaryk